A straightforward manner to draw trees of unbounded degree is to adjust the Rein gold Tilford algorithm by traversing the children of each node v from left to right, successively computing the preliminary coordinates and the modiﬁers.

To obtain a layout where smaller subtrees are spaced out evenly between larger subtrees as for example shown in Figure 45.3(d), we process the subtrees for each node v ∈ V from left to right, see Figure 45.4. In a ﬁrst step, every subtree is then placed as close as possible to the right of its left subtrees. This is done similarly to the algorithm for binary trees as described in Section 45.3 by traversing the left contour of the right subtree T (wright ) and the right contour of the subforest induced by the left siblings of wright .

Whenever two conﬂicting neighbors vleft and vright are detected, forcing vright to be shifted to the right by an amount of σ, we apply an appropriate shift to all smaller subtrees between the subtrees containing vleft and vright . 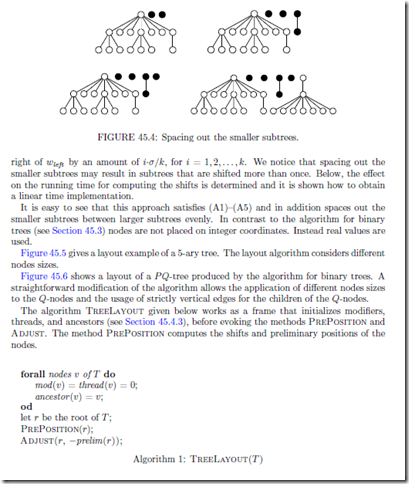 Based on the results of the function PrePosition the function Adjust given in Algo- rithm 2 computes the ﬁnal coordinates by summing up the modiﬁers recursively.

Algorithm 3 presents the method PrePosition(v) that computes a preliminary x-coordinate for a node v. PrePosition is applied recursively to the children of v. After each call 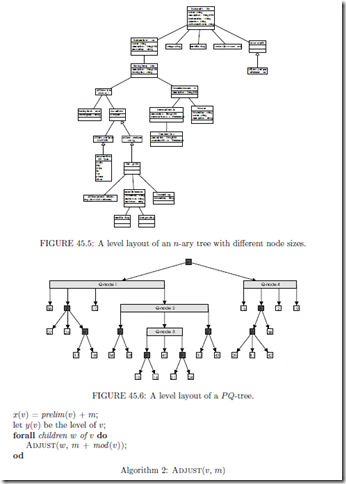 of PrePosition on a child w a function Apportion is executed on w. The procedure Apportion is the core of the algorithm and shifts a subtree such that it does not conﬂict with its left subforest. After spacing out the smaller subtrees by calling Execute Shifts, the node v is placed to the midpoint of its outermost children. The value distance pre- scribes the minimal distance between two nodes. If objects of diﬀerent size are considered for the representation of the nodes, or if diﬀerent minimal distances, i.e. between subtrees, are speciﬁed, the value distance has to be modiﬁed appropriately. 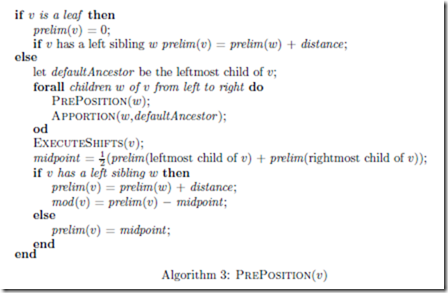 Combining a Subtree and Its Left Subforest

Before presenting Apportion in detail, we need to consider eﬃcient strategies for the diﬀerent tasks that are performed by this function.

Similar to the threads used for binary trees (see Sect. 45.3), Apportion uses threads to follow the contours of the right subtree and the left subforest. The fact that the left subforest is no tree in general does not create any additional diﬃculty.

A straightforward implementation computes the shifts for the intermediate smaller sub- trees after the right subtree has been moved. However, as has been shown in [2], this strategy has an aggregated runtime of Ω(|V 3/2 ). To prove this consider a tree T k such that the root has k children v1, v2,... , vk (see Figure 45.7 for k = 3). The children are numbered from left to right. Except for v1 let the i-th child vi be the root of a subtree T k(vi) that consist of a chain of i nodes. Between each pair vi, vi+1, i = 1, 2,... ,k − 1, of these children, add k children as leaves. Moreover, the subtree T k(v1) is modiﬁed as follows. Its root v1 has 2k + 5 children, and up to level k − 1, every rightmost child of the 2k + 5 children again 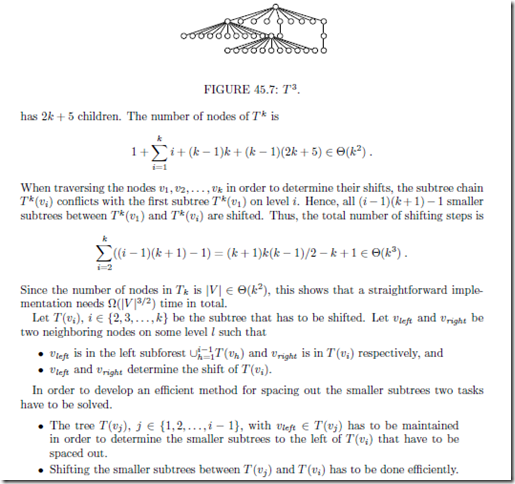 The next Section 45.4.3 shows how to obtain the tree T (vj ) eﬃciently. Section 45.4.4 gives a detailed description on how to compute the shift of T (vi) and Section 45.4.5 presents a method that spaces out smaller subtrees.

FIGURE 45.8: Adjusting ancestor pointers when adding new subtrees: the pointer ancestor (u) is represented by a solid arrow if it is up to date and by a dashed arrow if it has expired. In the latter case, the defaultAncestor is used and drawn black. When adding a small subtree, all ancestor pointers ancestor (u) of its right contour are updated. When adding a large subtree, only defaultAncestor is updated. 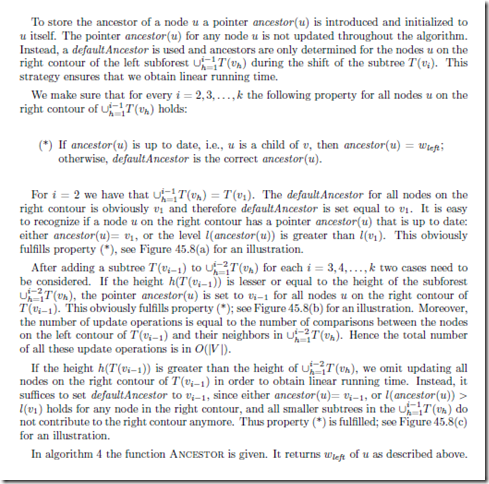 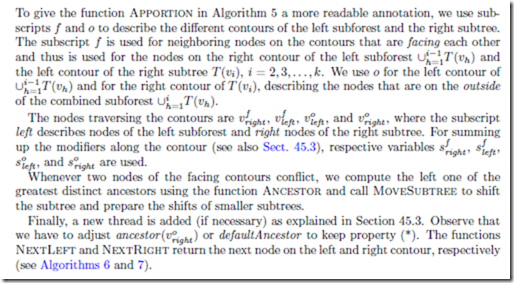 For spacing out the smaller subtrees evenly, the number of the smaller subtrees between the larger ones has to be maintained. Since simply counting the number of smaller children between two larger subtrees T (vj ) and T (vi), 1 ≤ j < i ≤ k would result in Ω(n3/2) time in total, it is determined as follows. The children of v are numbered consecutively. Once the pair of nodes vleft , vright that deﬁnes the maximum shift on T (vi) has been determined, the greatest distinct ancestors wleft = vj and wright = vi are easily determined by the approach described in Section 45.4.3. The number i − j − 1 gives the number of in between subtrees in constant time. 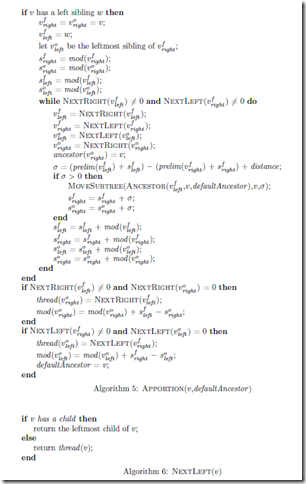 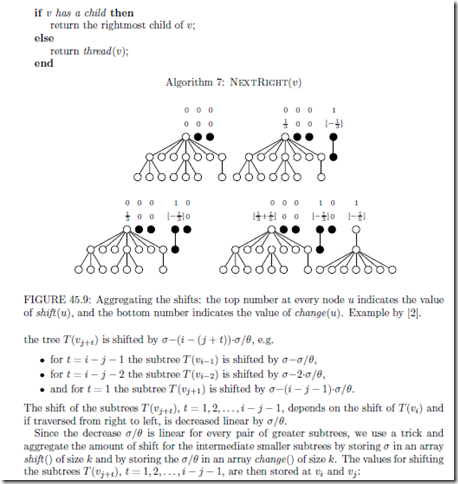 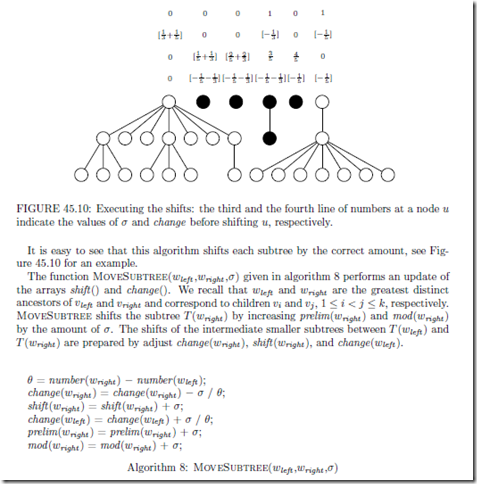 The function ExecuteShifts(v) traverses its children from right to left and determines the total shift of the children based on the arrays shift () and change().

THEOREM 45.2 [Buchheim et al. [2]] The layout algorithm for n-ary trees meets the aes- thetic requirements (A1)–(A5), spaces out smaller subtrees evenly, and can be implemented to run in O(|V |).

Proof By construction of the algorithm it is obvious that the algorithm meets (A1)–(A5) and spaces out the smaller subtrees evenly. So it is left to show that the running time is linear in the number of nodes.

Every node of T is traversed once during the traversals PrePosition and Adjust.

Similar reasoning as in the proof of theorem 45.1 for binary trees shows that the time needed to traverse the left contour of the subtree T (vi) and the right contour of subforest ∪h=1T (vh), i = 2, 3,... ,k for every node v with children vi, i = 1, 2,... ,k is linear in the number of nodes of T over all such traversals. Moreover, we have that by construction the number of extra operations for spacing out the smaller subtrees is linear in |V | plus the number of nodes traversed in the contours. This proves the theorem.