Next, we turn to priority queues, or heaps, supporting the following primitives:

• insert(x,h): insert the element x into the heap h and return the new heap.

• delete Min(h): delete the minimum element of h and return the new heap.

• merge(h1,h2): combine the heaps h1 and h2 into a single heap and return the new heap. 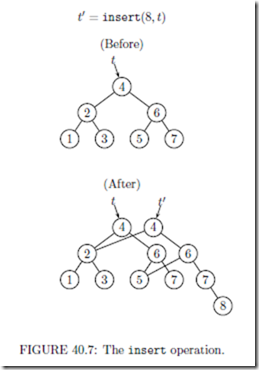 Many of the standard heap data structures can easily be adapted to a functional setting, including binomial queues [7, 15] and leftist heaps [18, 24]. In this section, we describe a simple, yet interesting, design known as skew heaps [32]. (Non-persistent skew heaps are described in detail in Chapter 6.)

A skew heap is a heap-ordered binary tree. Each node contains a single element, and the nodes are ordered such that the element at each node is no larger than the elements at the node’s children. Because of this ordering, the minimum element in a tree is always at the root. Therefore, the find Min operation simply returns the element at the root. The insert and delete Min operations are deﬁned in terms of merge: insert creates a new node and merges it with the existing heap, and delete Min discards the root and merges its children. The interesting operation is merge. Assuming both heaps are non-empty, merge compares their roots. The smaller root (that is, the root with the smaller element) becomes the new overall root and its children are swapped. Then the larger root is merged with the new left child of the smaller root (which used to be the right child). The net eﬀect of a merge is to interleave the rightmost paths of the two trees in sorted order, swapping the children of nodes along the way.

This process is illustrated in Figure 40.8.

Skew heaps are not balanced, and individual operations can take linear time in the worst case. For example, Figure 40.11 shows an unbalanced shew heap generated by inserting the elements 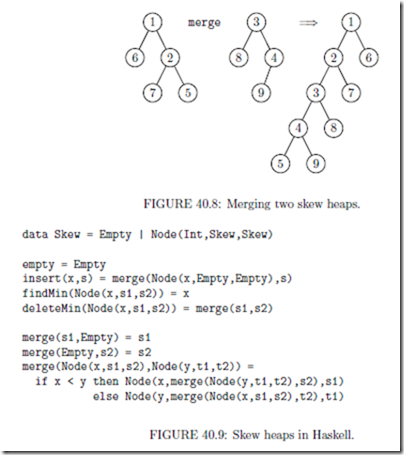 into an initially empty heap. Inserting a new element such as 7 into this unbalanced skew heap would take linear time. However, in spite of the fact that any one operation can be ineﬃcient, the way that children are regularly swapped keeps the operations eﬃcient in the amortized sense—insert, delete Min, and merge run in logarithmic amortized time [32].

Consider, for example, the unbalanced skew heap s in Figure 40.11, for which insert takes linear time for large elements. The result of the insert is a new skew heap sl. Performing another insert on sl would actually be quite eﬃcient, but because these structures are persistent, we are free to ignore sl and perform the next insert on the old skew heap s instead. This insert again takes linear time. We can continue performing operations on the old skew heap as often as we want. The average cost per operation over a sequence of such operations is linear, which means that the amortized cost per operation is now linear, rather than logarithmic. Simple experiments on the Java implementation from Figure 40.10 conﬁrm this analysis. 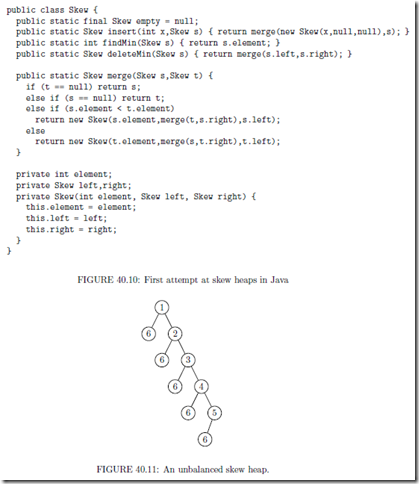 However, if we repeat those experiments on the Haskell implementation from Figure 40.9, we do not observe linear behavior. Instead, the operations appear to retain their logarith- mic amortized bounds, even under persistent usage. This pleasant result is a consequence of a fortuitous interaction between path copying and a property of the Haskell language called lazy evaluation. (Many other functional programming languages also support lazy evaluation).

A crucial aspect of lazy evaluation is that a pending computation, once triggered, is executed only far enough to produce the part of the result that is needed. The remaining parts of the computation may be delayed further by creating new pending nodes. In the case of the merge operation, this means that when a pending merge is executed, the two roots are compared and the children of the smaller root are swapped as normal, but the recursive merge of the larger root with the former right child of the smaller root is not performed. Instead, a new pending merge is created and installed as the left child of the new root node. This process is illustrated in Figure 40.13, with the pending merges drawn as diamonds.

Notice that pending nodes and lazy evaluation aﬀect when the various steps of a merge are carried out, but that they do not aﬀect the end results of those steps. After all the pending merges have been executed, the ﬁnal tree is identical to the one produced by skew heaps without lazy evaluation.

Strictly speaking, the nodes of a lazy skew heap can no longer be called immutable. In particular, when a pending merge is executed, the node representing the pending merge is updated with the result so that it cannot be executed twice. Functional languages typically allow this kind of mutation, known as memoization, because it is invisible to the user, except in terms of eﬃciency. Suppose that memoization was not performed. Then pending merges might be executed multiple times. However, every time a given pending merge was executed, it would produce the same result. Therefore, memoization is an optimization that makes lazy evaluation run faster, but that has no eﬀect on the output of any computation.

Next, we prove that merge on lazy skew heaps runs in logarithmic amortized time. We use the banker’s method, associating a certain number of credits with each pending merge.

Now, we charge one credit to execute a single pending merge. This credit pays for the 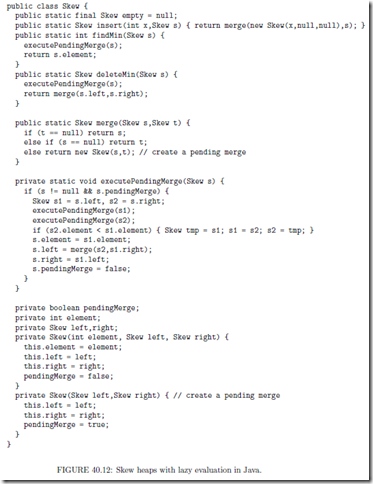 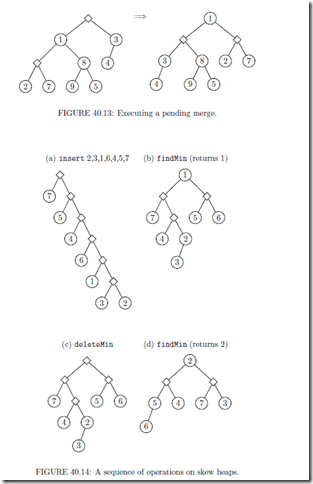 When we create a pending node, we must provide it with all the credits it will ever need. This includes

• one credit for itself, if it is right-heavy,

• one credit for each child that is a left-heavy pending node, and

• any credits needed by its successors.