In the last couple of decades, there has been a tremendous growth in using randomness as a powerful source of computation. Incorporating randomness in computation often results in a much simpler and more easily implementable algorithms. A number of problem do- mains, ranging from sorting to stringology, from graph theory to computational geometry, from parallel processing system to ubiquitous internet, have beneﬁted from randomization in terms of newer and elegant algorithms. In this chapter we shall see how randomness can be used as a powerful tool for designing simple and eﬃcient data structures. Solving a real-life problem often involves manipulating complex data objects by variety of operations. We use abstraction to arrive at a mathematical model that represents the real-life objects and convert the real-life problem into a computational problem working on the mathematical entities speciﬁed by the model. Speciﬁcally, we deﬁne Abstract Data Type (ADT) as a mathematical model together with a set of operations deﬁned on the entities of the model. Thus, an algorithm for a computational problem will be expressed in terms of the steps involving the corresponding ADT operations. In order to arrive at a computer based implementation of the algorithm, we need to proceed further taking a closer look at the possibilities of implementing the ADTs. As programming languages support only a very small number of built-in types, any ADT that is not a built-in type must be represented in terms of the elements from built-in type and this is where the data structure plays a critical role. One major goal in the design of data structure is to render the operations of the ADT as eﬃcient as possible. Traditionally, data structures were designed to minimize the worst-case costs of the ADT operations. When the worst-case eﬃcient data structures turn out to be too complex and cumbersome to implement, we naturally explore alternative design goals. In one of such design goals, we seek to minimize the total cost of a sequence of operations as opposed to the cost of individual operations. Such data structures are said to be designed for minimizing the amortized costs of operations. Randomization provides yet another avenue for exploration. Here, the goal will be to limit the expected costs of operations and ensure that costs do not exceed certain threshold limits with overwhelming probability.

In this chapter we discuss about the Dictionary ADT which deals with sets whose elements are drawn from a ﬁxed universe U and supports operations such as insert, delete and search. Formally, we assume a linearly ordered universal set U and for the sake of concreteness we assume U to be the set of all integers. At any time of computation, the Dictionary deals only with a ﬁnite subset of U . We shall further make a simplifying assumption that we deal only with sets with distinct values. That is, we never handle a multiset in our structure, though, with minor modiﬁcations, our structures can be adjusted to handle multisets containing multiple copies of some elements. With these remarks, we are ready for the speciﬁcation of the Dictionary ADT.

DEFINITION 13.1 [Dictionary ADT] Let U be a linearly ordered universal set and S denote a ﬁnite subset of U . The Dictionary ADT, deﬁned on the class of ﬁnite subsets of U , supports the following operations.

Due to its fundamental importance in a host of applications ranging from compiler design to data bases, extensive studies have been done in the design of data structures for dictionaries.

• We describe a data structure called Skip Lists and present a comprehensive probabilistic analysis of its performance.

• We discuss an interesting randomized variation of a search tree called Randomized Binary Search Tree and compare and contrast the same with other competing structures.

In this section we collect some basic deﬁnitions, concepts and the results on randomized computations and probability theory. We have collected only the materials needed for the topics discussed in this chapter. For a more comprehensive treatment of randomized algorithms, refer to the book by Motwani and Raghavan [9].

The type of randomized algorithms that we discuss in this chapter is called Las Vegas type algorithms. A Las Vegas algorithm always terminates with a correct answer although the running time may be a random variable exhibiting wide variations. There is another important class of randomized algorithms, called Monte Carlo algorithms, which have ﬁxed running time but the output may be erroneous. We will not deal with Monte Carlo algorithms as they are not really appropriate for basic building blocks such as data structures.

We shall now deﬁne the notion of eﬃciency and complexity measures for Las Vegas type randomized algorithms.

1. n− exponential probability or very high probability, if for any input of size n, the amount of the resource used by A is at most αf (n) with probability 1 − O(β−n), β > 1. In this case f (n) is called a very high conﬁdence bound.

2. n − polynomial probability or high probability, if for any input of size n, the amount of the resource used by A is at most αf (n) with probability 1 − O(n−c ). In this case f (n) is called a high conﬁdence bound.

3. n − log probability or very good probability, if for any input of size n, the amount of the resource used by A is at most αf (n) with probability 1 − O((log n)−c). In this case f (n) is called a very good conﬁdence bound.

The practical signiﬁcance of this deﬁnition can be understood from the following discussions. For instance, let A be a Las Vegas type algorithm with f (n) as a high conﬁdence bound for its running time. As noted before, the actual running time T (n) may vary from one execution to another but the deﬁnition above implies that, for any execution, on any input, P r(T (n) > f (n)) = O(n−c). Even for modest values of n and c, this bound implies an extreme rarity of failure. For instance, if n = 1000 and c = 4, we may conclude that the chance that the running time of the algorithm A exceeding the threshold value is one in zillion.

We assume that the reader is familiar with basic notions such as sample space, event and basic axioms of probability. We denote as P r(E) the probability of the event E. Several results follow immediately from the basic axioms, and some of them are listed in Lemma 13.1.

LEMMA 13.1 The following laws of probability must hold: 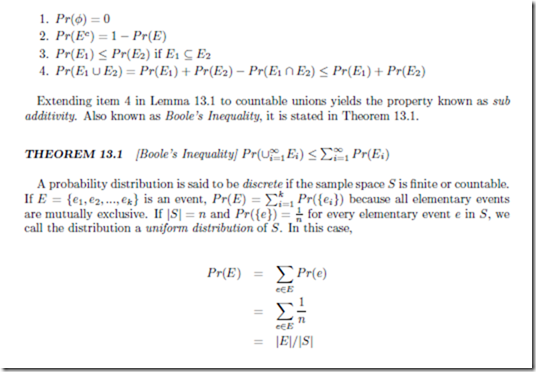 which agrees with our intuitive and a well-known deﬁnition that probability is the ratio of the favorable number of cases to the total number of cases, when all the elementary events are equally likely to occur.

In several situations, the occurrence of an event may change the uncertainties in the oc- currence of other events. For instance, insurance companies charge higher rates to various categories of drivers, such as those who have been involved in traﬃc accidents, because the probabilities of these drivers ﬁling a claim is altered based on these additional factors.

Lemma 13.2 shows that the conditional probability of two events is easy to compute. When two or more events do not inﬂuence each other, they are said to be independent. There are several notions of independence when more than two events are involved. Formally,

Given a partition S1,... , Sk of the sample space S, the probability of an event E may be expressed in terms of mutually exclusive events by using conditional probabilities. This is known as the law of total probability in the conditional form.

The law of total probability in the conditional form is an extremely useful tool for calculating the probabilities of events. In general, to calculate the probability of a complex event E, we may attempt to ﬁnd a partition S1, S2,…, Sk of S such that both P r(E/Si) and P r(Si) are easy to calculate and then apply Lemma 13.3. Another important tool is Bayes’ Rule.

Most of the random phenomena are so complex that it is very diﬃcult to obtain detailed information about the outcome. Thus, we typically study one or two numerical parameters that we associate with the outcomes. In other words, we focus our attention on certain real-valued functions deﬁned on the sample space.

The probability mass function is also known as the probability density function. Certain trivial properties are immediate, and are given in Lemma 13.4. 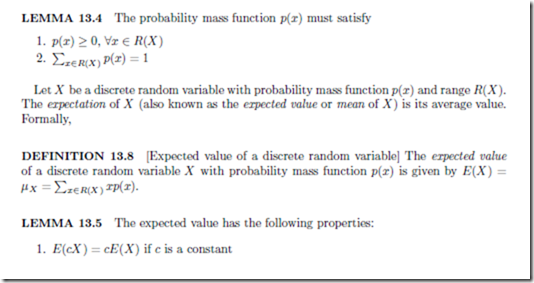 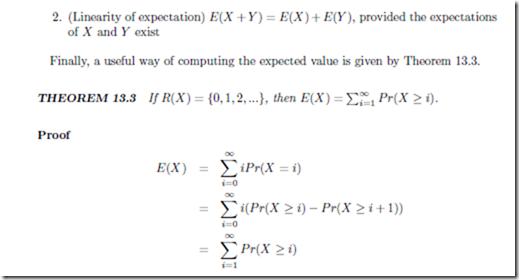 coin ﬂip is also known as Bernoulli Trial, in honor of the mathematician who investigated extensively the distributions that arise in a sequence of coin ﬂips.

Let X be a random variable X denoting the number of times we toss a p-biased coin until we get a success. Then, X satisﬁes the geometric distribution. Speciﬁcally,

The probability mass function is based on k −1 failures followed by a success in a sequence of k independent trials. The mean and variance of a geometric distribution are easy to compute.

Fix an integer n and deﬁne a random variable X denoting the number of ﬂips of a p– biased coin to obtain n successes. The variable X satisﬁes a negative binomial distribution. Speciﬁcally, 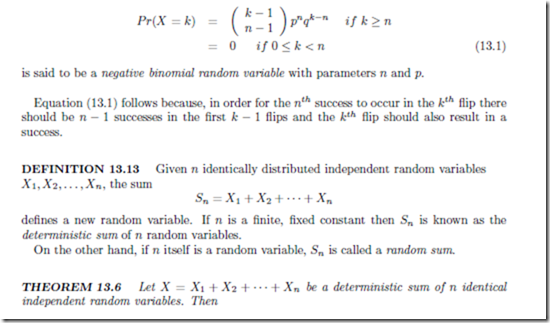 Deterministic sums and random sums may have entirely diﬀerent characteristics as the following theorem shows.

Recall that the running time of a Las Vegas type randomized algorithm is a random variable and thus we are interested in the probability of the running time exceeding a certain threshold value.

The next two theorems state some very useful tail estimates derived by Chernoﬀ. These bounds are popularly known as Chernoﬀ bounds. For simple and elegant proofs of these and other related bounds you may refer [1]. 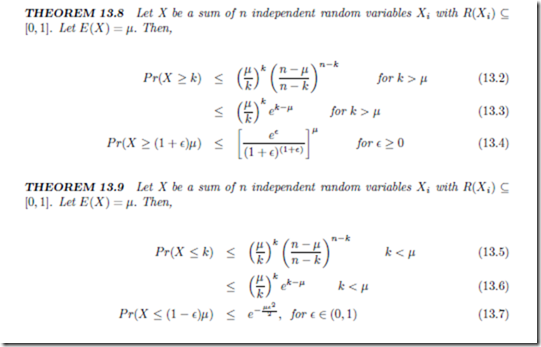